March 22, 2016
At work I serve as a member of the Employee Action Committee (EAC, for short). One of my responsibilities on that committee is to serve as the representative to --- THE CHESS CLUB. (A little backstory here - I work on the 5th floor, in Information Systems, which means I sit around a lot of men who are nerds. And because I sit around them, and they know I'm on the EAC, I was enlisted to be their rep when they submitted their club application. So, there I am.) 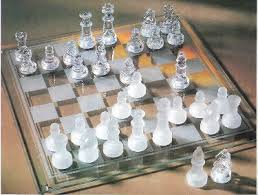 Now, the last time I played chess was probably in 6th grade. And I do not at all consider myself to be a chess aficionado. I know the game board looks like a checkerboard, and I know it has something to do with pawns, kings, queens, mates, and checks, and that you have to be really smart, and usually Russian to play it. But beyond that, I'm more familiar with "Chess" the musical than I am with the game.

But there I was today, at the first official meeting of the Chess Club, with a bunch of nerdy men, playing chess and apparently holding my own (as the EAC rep, I was just expecting to show up and hang in the back while all the guys played, but they were having none of that). Unbeknownst to me, I even pulled a "fork" move (whatever that is), and my opponent was very much impressed.

We have high hopes for our little club. We plan to meet once a month, and maybe do door prizes, and tournaments. In the meantime, I guess I need to start studying up on "Basic Chess for Dummies".

Popular posts from this blog

April 11, 2016
I don't know that I've ever talked about it, but for the last 3 or 4 years, I've followed a diet all my own that I call "Mostly Vegetarian" or "Flexitarian". The idea is that for the most part, I follow a vegetarian lifestyle, with the occasional serving or two of meat when I feel like I need it. A few years ago, I was going through a rough patch. I had gained a few pounds, and my only vegetable intake was in the form of salsa or V8. So one January as I was trying to identify some goals for the year, I decided to eat 2-3 servings of vegetables a day, and I would start strength training. I started working on those two things, and an unanticipated result was that weight started to come off. I ended up losing about 15 pounds, and I found that I enjoyed vegetables so much (who knew?) that I started eating more of them. And the more vegetables I ate, the less meat I ate. Over the years, I've felt so good for the most part that I've stuck with it.
Post a Comment
Read more

January 27, 2019
If you've been watching Netflix much lately, you've probably seen the new series "Tidying Up", with Marie Kondo. She's an expert in cleaning, tidying, and storing stuff, and her method is quite inspiring. I enjoyed the show so much that I ordered her book "The Life-Changing Magic of Tidying Up", and spent several days trying to get my house more in order. Not that I'm a hoarder - I have a basically tidy home. But the Kon-mari method teaches you to look at your belongings and ask yourself if each particular belonging brings you joy. If it doesn't, it's time for it to move on. I went through all my clothes first, followed by my books and DVD's, followed by the office, followed by the kitchen and laundry room. Whatever didn't bring me joy or a happy memory went into the pile. And when all was said and done, I ended up taking an entire car full of stuff to the local Deseret Industries, to hopefully be re-purposed for someone else to find
Post a Comment
Read more

My Work Here is Done

April 28, 2019
After a journey of over two years, yesterday I turned in my final assignment for my Master's program. I honestly don't know what to do with myself now. The last two years and then some have been as difficult and time consuming as I imagined it would be, but they've also been amazing. I've learned so many things, and hopefully positioned myself better for future career and service opportunities. Folks have encouraged me to take some time and take a break for a bit. And maybe I'll do that. Then again, I might not, lol. In the meantime, I'm off next week to walk in my Commencement and make sure I get that darn degree in my hot little hand.
Post a Comment
Read more

Tracie
Salt Lake City, Utah, United States
I like to think of myself as a "Modern LDS Gal". I'm a Blogger, a Business Analyst, an Amateur Genealogist, a Dodger Fan, the World's Best Aunt...and I'm a member of the Church of Jesus Christ of Latter-day Saints.